There’s a big, bright orange building new to the landscape in the summer of 2012, next door to Palatine Sports College.

It’s a facility for young people, which was designed in consultation with young people, to make sure that their views were included right from the very start.

Keeping true to that principle, it was named ‘The Oracle’, following a competition where youngsters aged 11 to 24 responded in their droves, with 100 entries being submitted after they were asked to give their ideas for what the building should be called.

Alfie Bradley-Johnson, aged 15 and from Highfield Humanities College, came up with the name. He said: “I wanted to pick a name that would get people’s attention but also attract young people to the venue.

“The Oracle is about learning and that is what the building is about too. I hope The Oracle is going to inspire young people to get involved, have fun and learn.”

Very visible in the surrounding area and from Yeadon Way it’s a landmark for young people for the future.

The project was constructed by Blackpool Council, in partnership with Conlon Construction, and is due to be officially opened in September. 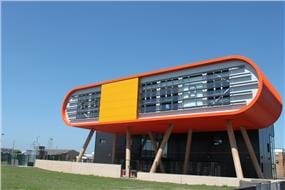