Many thanks to steam and transport enthusiast Barrie C Woods for this piece and accompanying photos.

Barrie is a regular contributor and often sends in photos and articles on transport themes. This article is about the World’s first Illuminated Tram Parade, which took place as part of LightPool 2017. It was a beautiful cool evening along Blackpool Promenade. Dusk was approaching, the sun quietly setting behind a bank of distant grey clouds, the tide was in but the sea was calm, and for a change there was no wind to battle against.

The miles of illuminations would soon be switched on, all the way from South Shore to Bispham.

I arrived at the Pleasure Beach tram turn-around, it was fairly quiet, the ‘High’ season was well past by now, and there was an autumn nip in the air. Not a tram in sight.

The Pleasure Beach rides were still active, with the occasional scream emanating from the ‘Big One’ breaking the quietude, as yet another fully loaded set of cars careered down from its peak of 235 feet down the almost vertical descent at over 80mph! The occasional waft of fish & chips captivated the nostrils – what else you expect in Blackpool?

Almost silently the double-deck Standard Tram, Bolton No.66 glided into the Pleasure Beach stop. It would soon return to Rigby Road depot – its day’s work completed. With nothing else to amuse me I followed it on my bicycle towards the Tower.

After half a mile I spotted some movement ahead of me at Manchester Square – which is not actually a Square but a ‘T’ junction on the Prom!   I’d spotted something my informant had advised me of.

The American 4-4-0 illuminated tram and carriage had just emerged from the depot and was heading south towards me. The Fisherman’s Friend sponsored Trawler tram ‘CEVIC’ No. 737, begins loading for its parade along to the Tower. The Frigate and American 4-4-0, are ready to leave.

I doubled back with a quick glance again which revealed the Frigate was following close behind. Back at Pleasure Beach a further glance northwards revealed the ‘New’ Trawler ‘CEVIC, littered with LEDs was also on its way.

People were beginning to gather there was an air of expectancy brewing, a number of Blackpool Corporation staff appeared, then slowly the American 4-4-0 with its carriage obediently following turned into the tram stop.

The Frigate drew in behind it and the Trawler likewise. A unique sight, never before had the three illuminated trams been out on parade together. Darkness was still half an hour away but as it enveloped us the three trams lights began to shine to their full glory. 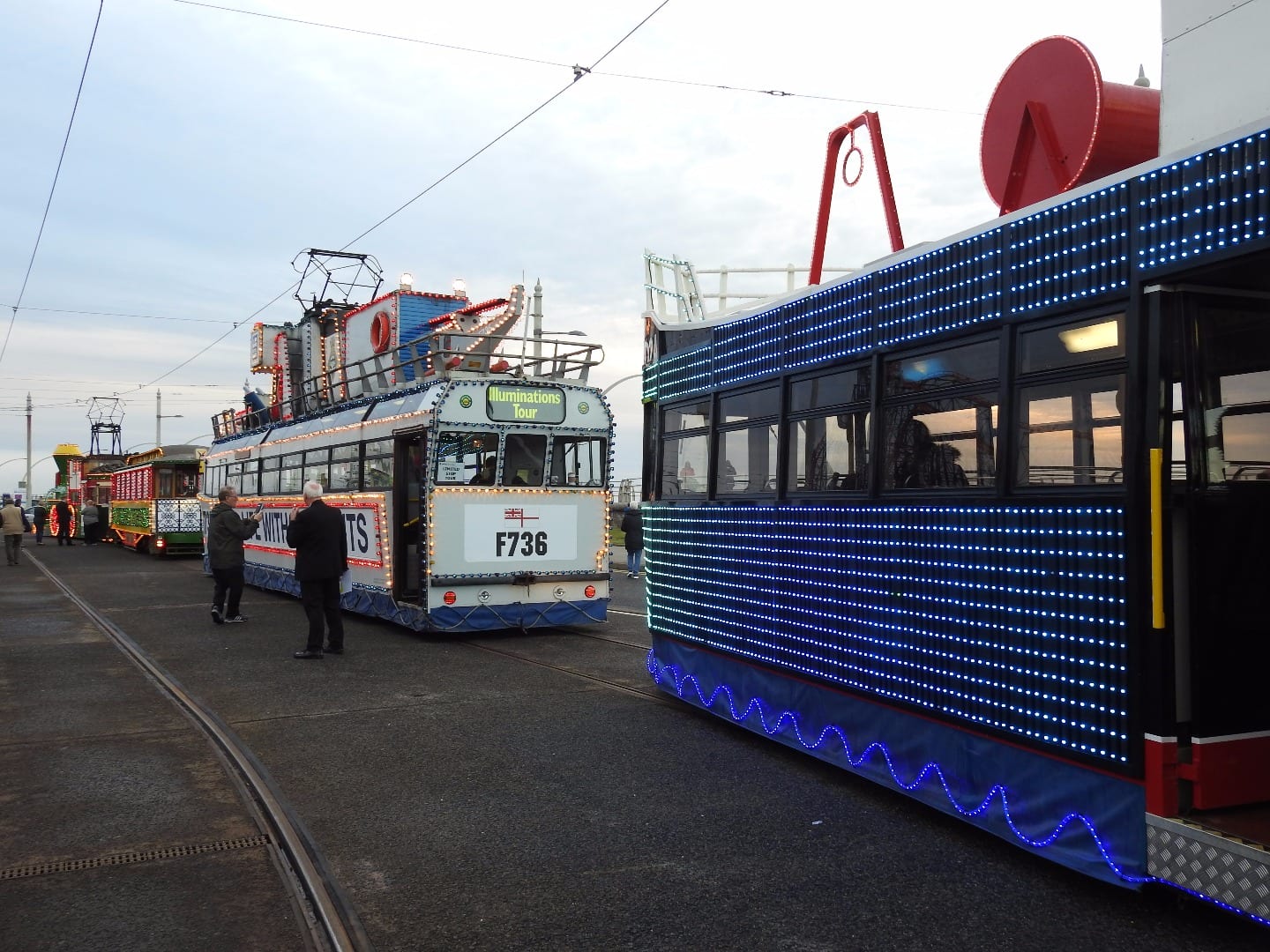 At Pleasure Beach the three trams begin to glow as dusk approaches.

More and more people arrived to view the spectacle, each tram was fully booked, many were turned away. Departure was timed for 17.55. Just before that I again mounted my bicycle and headed north, darkness was almost upon us, an autumn moon shone down on the proceedings, as I progressed towards the Tower so the crowds intensified, to a point where I had to dismount and walk.

Outside the Tower a stage, with live music blaring out and shattered the calm, in fact the whole place was now abuzz. Thousands of people were jostling for a position across the Comedy Carpet. Ice creams and children’s light sticks and glowing windmills were being sold by the dozen.

Suddenly Blackpool’s famous overhead illuminations sprang into life. The Flexity tram service had to be stopped, no way would they safely pass through the melee.

Then in the distance amongst the overhead illuminations and plethora of car headlights, other lights appeared approaching us along with distance drums sounding out a marching theme an eerie glow emanated from where the sounds came from. This was Spark! by Worldbeaters Music – a unique and thrilling show that combines high-impact drumming, superb choreography and stunning lighting design.

Gradually Spark came into view with their unique and specially constructed drums glowing with LEDS and smoke haze. 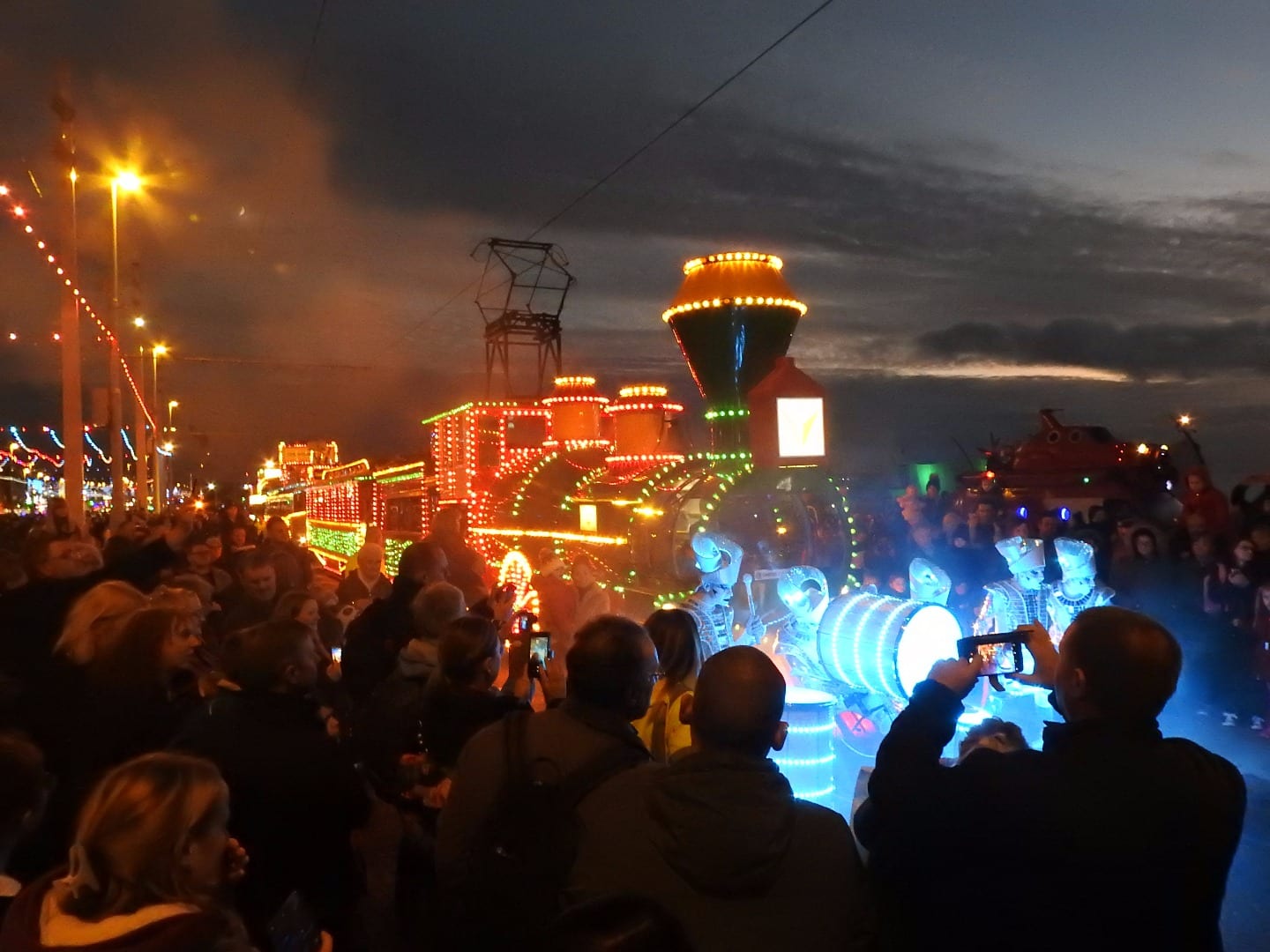 Behind came the American tram, its bell clanging loudly as if in defiance of all the other noises, then the Frigate ‘HMS Blackpool’ and the Trawler ‘Cevic’.

Other groups had joined in the parade, the whole place now alive with music and the three trams glowing brilliantly.

After a short stop to disgorge passengers the trams continued north to turn on the Bispham turn-around and head south to collect their passengers for the return journey to Pleasure Beach. 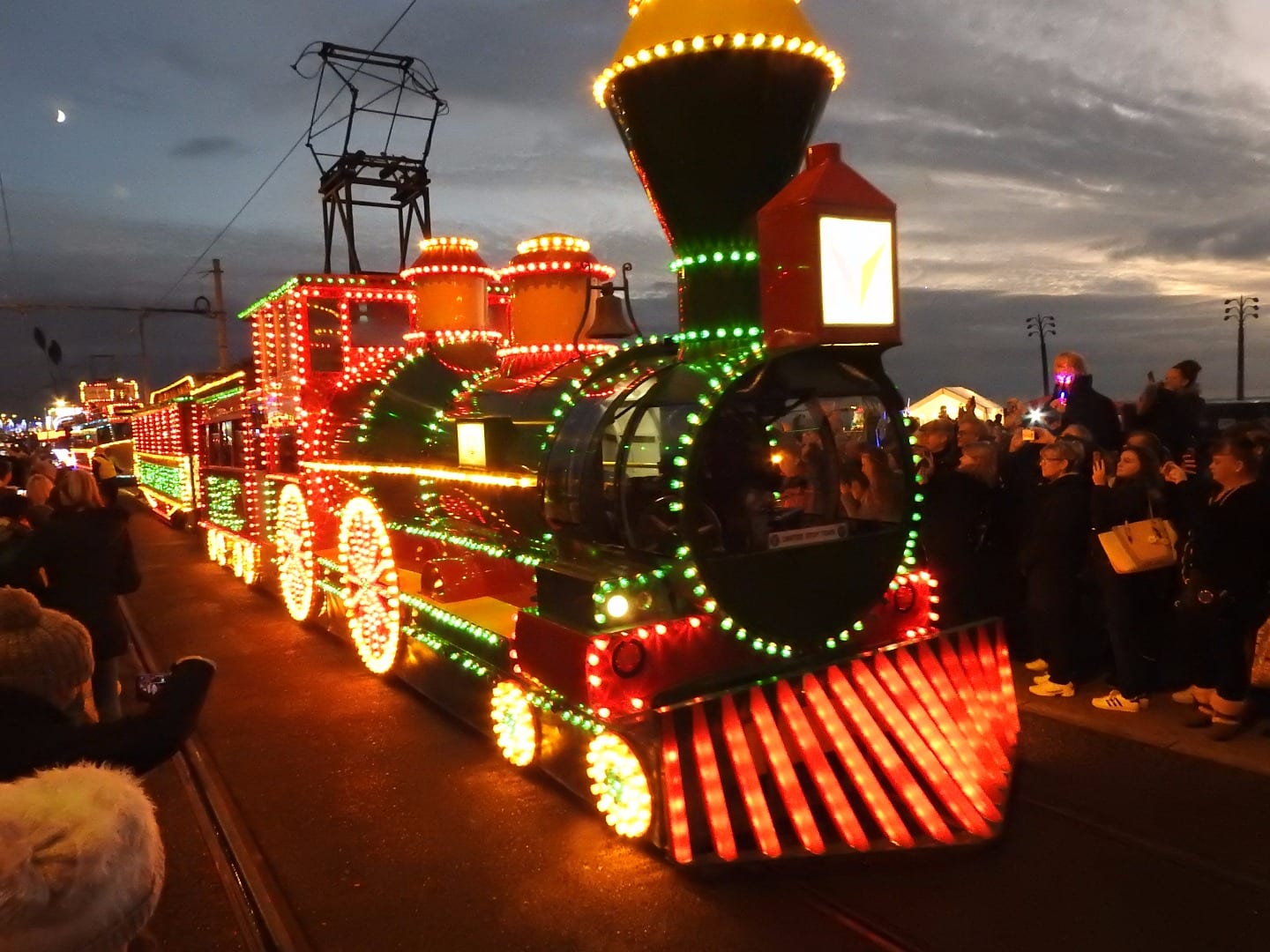 The sun sets and the moon rises at the Comedy Carpet in front of the Tower, the three trams slow to disgorge their passengers.

The music played on. It was an incredible spectacle. What an evening! 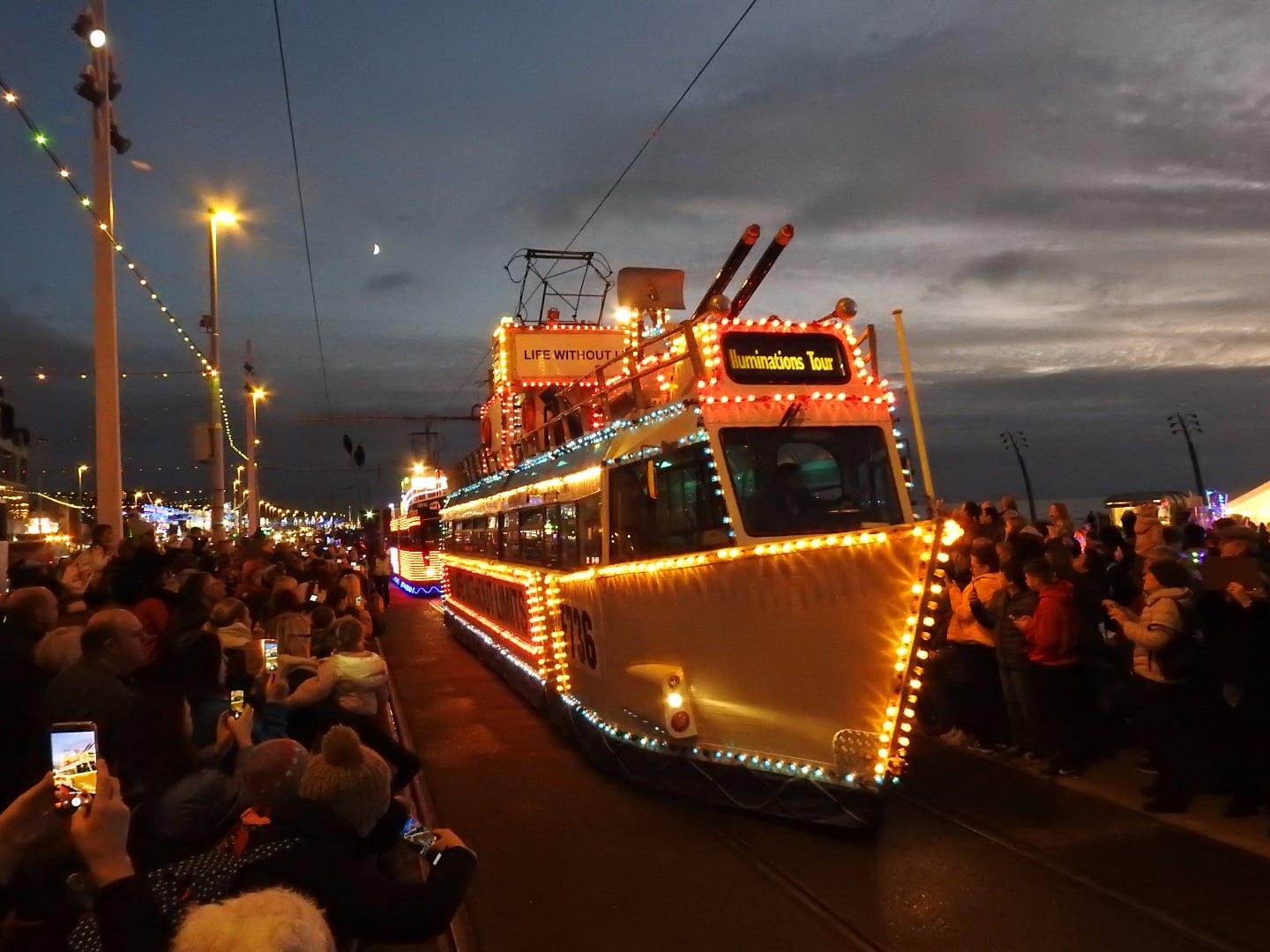 Mobile phones are working overtime at the Tower to Capture the unique spectacle.  Here the two ships come sailing in! 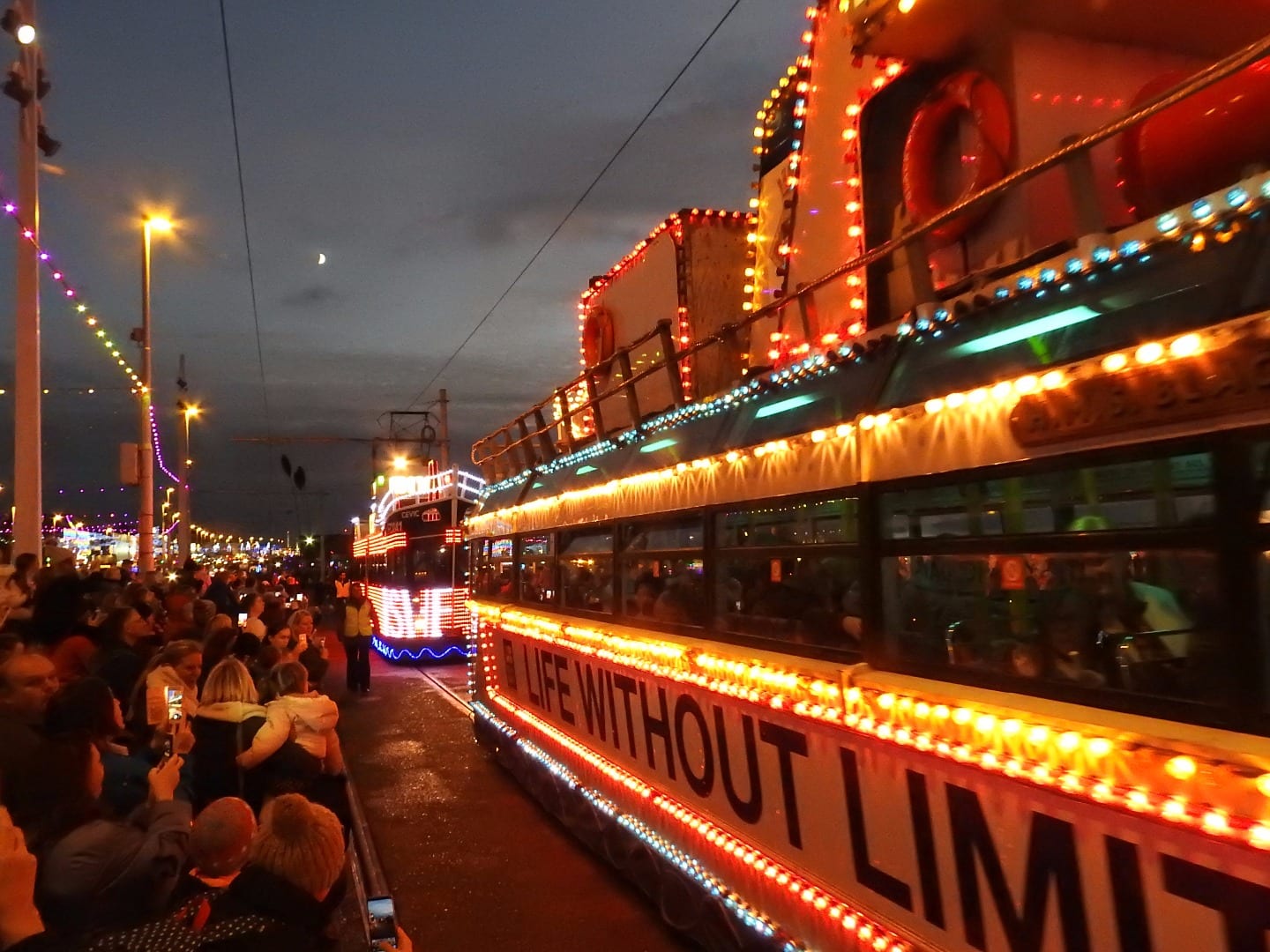 As HMS Blackpool, No. 736, passes, the LED strewn Trawler draws in.

To end on a video clip…

Here’s a short clip from the evening, ffrom the Blackpool Illuminations Facebook page

PS:  On returning to my push-bike I discovered a flat tyre! However after pumping it up I managed to get back to Poulton, but not quite to my home. Infact I had to stop again right outside our local Wetherspoon’s ‘The Elk’  for a rest (or two) before pumping it up again for the final mile home.!! 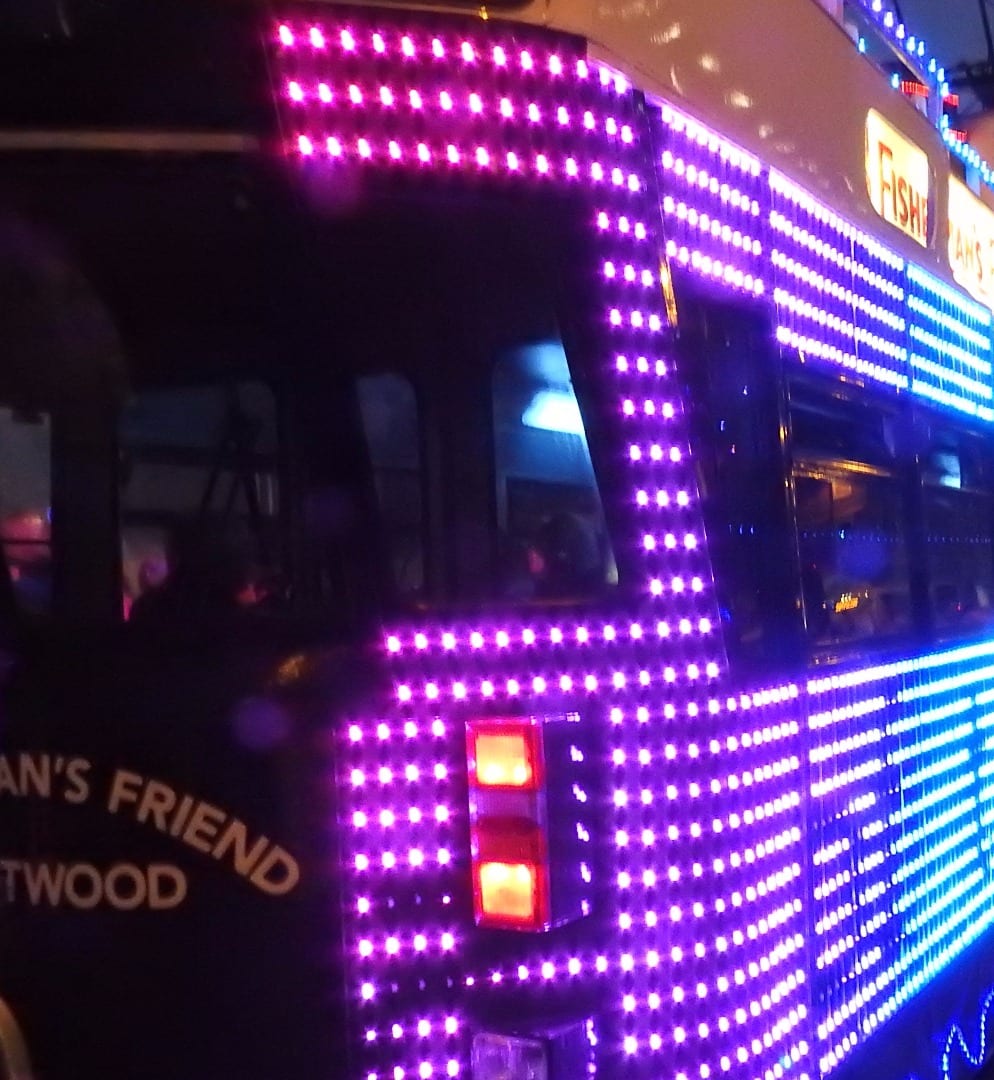