“We all love Kingscote Park!”

That’s what this group of volunteers think – and they’ve been working with the Council to improve it.

The New Langdale Community volunteers, as well as local councillors and officers have been busy throughout the winter providing a dose of tender loving care to the park at Layton.

The volunteers, made up of adults with learning disabilities, gave up two full days of their time to improve the park and ensuring it was made as accessible as possible, thinning the trees to increase visibility, as well as cleaning up piles of mess that had been left behind and removing some of the dead trees.

The green team fingered volunteers were also helped by the park based Blackpool Stanley Rugby Club, who opened up their central pavilion to all of the workers and provided refreshments free of charge while they carried out the improvements.

The work is going to improve the park for everybody, according to local ward councillor Kathryn Benson.

She said: “We would very much like to thank the Community Volunteers for helping in Kingscote Park – their enthusiasm is truly infectious.

“Just being in the park on the first day you can see what a big difference they are already making. This work will benefit all residents in the Layton area and the wider community that use the park.”

A special ‘Friends of Kingscote Park’ group has also been set up to look after the upkeep of the green space for years to come.

Cllr Benson added: “Kingscote Park is a community park that is highly popular with dog walkers and local sporting groups and to see it restored to its former glory and to have its Green Flag status awarded is an ambition that the Friends group hope to achieve in the near future.

“This project will hopefully go some way to seeing that ambition achieved.”

Fellow ward councillor in Layton, Martin Mitchell, added: “It’s been great to see the volunteers make so much difference in such a short space of time. They’re really inspiring.”

If you love Kingscote Park too, you can get involved with the Friends group who meet on the last Monday of each month at 7pm at the pavilion, with the next meeting taking place on 26 January 2015. 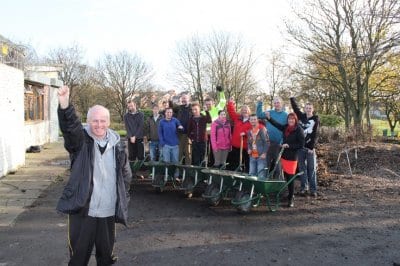