Sooty and Friends Light Up Blackpool

Did you know that the little glove puppet that became Sooty was discovered on Blackpool North Pier in 1948? He went on to become the most enduring character in the history of children’s television in this country.

Sooty and Friends Light up the Golden Mile

Now, Britain’s best-loved bear has been given the ultimate accolade – pride of place on Blackpool’s famous Golden Mile.

Giant models of Sooty and his friends, Sweep and Soo, form a brand-new road section in the 2019 Blackpool Illuminations, near to Central Pier. The colourful display is a celebration of the little glove puppet, right here in his birth town!

At the north end of the Illuminations, there’s a tableau that was installed in 2018 to celebrate his 70th birthday. 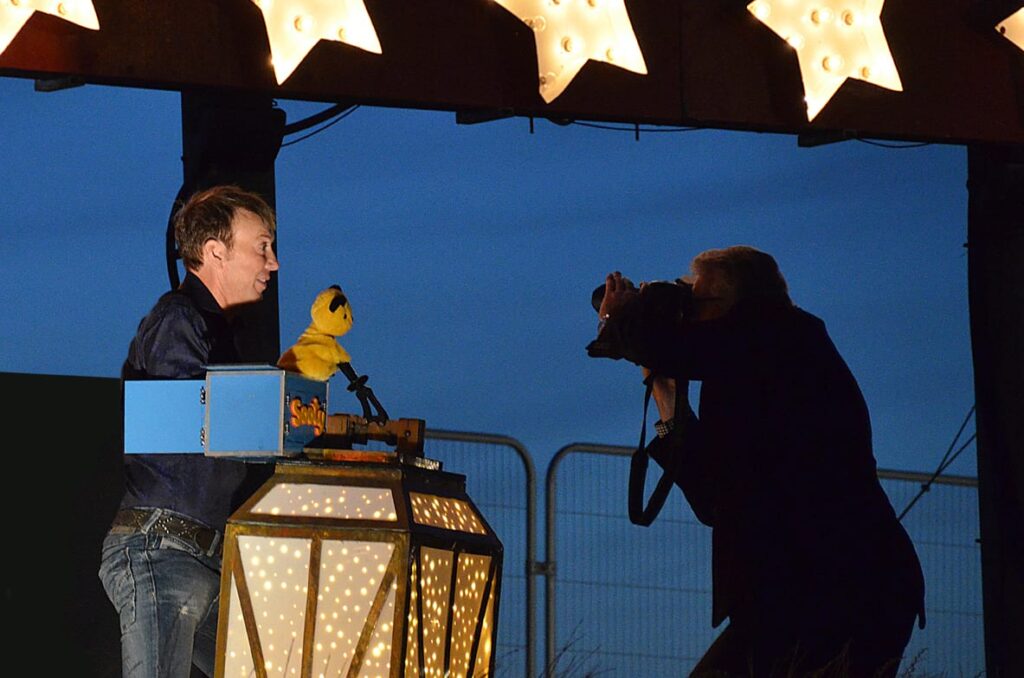 From mid-October, you can see him and his friends in a 3D light projection show on the front of The Blackpool Tower buildings. It’s part of the annual Lightpool Festival.

Richard Cadell said: “Having seen how much people loved the tableau, it seemed only right to finally go one better this year and give Sooty pride of place on one of the most famous stretches of promenade in the world.

“The Blackpool Illuminations delight all generations, and we know that every single person viewing them will know and love this little glove puppet and his friends.”

The History of Sooty

That summer back in 1948, Harry Corbett travelled to Blackpool from Yorkshire, for a holiday with his family.

While walking on North Pier he saw the puppet. Harry was an electrical engineer at the time, but hosted children’s parties to earn extra money to look after his family. He first checked with his wife Marjorie that he could buy the puppet – for 7 shillings and sixpence.

And so began this television legend and icon!

The original Sooty glove puppet is on display in the ticket office at North Pier. Find him in the first kiosk as you enter the pier at the left.

The plaque underneath his case reads:

“Sooty was discovered by Harry Corbett in a joke shop, here on North Pier on 19 July 1948.

“You are looking at the oldest surviving Sooty, possibly the original. He was returned to the people of Blackpool by Richard Cadell, Sooty’s TV presenter and owner of the Corbett archive.

“Sooty is a lifelong friend of RNIB. He raises funds to help thousands of blind and partially sighted adults in the UK to make the most of life.”

Did you know? That Sooty also has his very own Blue Plaque too!

The plaque was moved into a more prominent place on the railings at the side of the Pier, to celebrate the little bears 70th anniversary.

Who is your Favourite Sooty Presenter?

Harry Corbett was the first TV presenter to work with Sooty, Sweep and Soo.

Then his son, Matthew Corbett, took over the important task. Here’s an episode from 1984 – one of the last ones to feature Harry Corbett.

Today, Richard Cadell is presenter of the Sooty show. Here’s a current clip –