Blackpool Airshow is an iconic event in the yearly calendar – it’s a fabulous FREE fun day for all of the family!

There’s been an airshow in Blackpool for more than 100 years. Did you know it’s one of the longest running ones in the world? The first major airshow was held at Blackpool Airport way back in 1909. 2000 people marvelled as the most primitive planes performed their routine.

Sadly, the 2019 Blackpool Airshow was scuppered by a weekend of very unseasonably stormy weather.

VisitBlackpool, organisers of the event, made the decision to cancel the first day, the Saturday, due to a forecast of extreme weather conditions. Their spokesperson said: “The safety of the pilots and the watching public is paramount. With wind speeds forecast at more than 45mph on Saturday afternoon there is no option other than to cancel that day’s programme.

The second day went ahead on Sunday, and although the wind wasn’t quite as ferocious, the weather was far from ideal.

A cool and windy August day

Visit Fylde Coast contributor Barrie C Woods braved the wind and rain and went along to get some photos for us.

The top of Blackpool Tower taken from the seaward end of Central Pier.  It not only shows the Blackpool football club flag flying instead of the usual Union Jack, but look carefully and you’ll also notice a guy up there as well. Not the place to be with howling winds all around!

A head-on view of the AeroSuperBatics Wing-Walkers in action.  The ladies on top of the wings cause considerable drag, which would prove too much for the original 220hp engines these aircraft were originally built with. Plane modifications included an up-rated air-cooled radial engine rated at 450hp. They date to 1940 – the planes not the ladies! They were produced by Boeing from 1933. These are Super Stearman model 75s, with various other modifications to accommodate the ladies and additional stresses which the aerobatic show imposes on the structures.

Immediately the show finishes the ladies climb down from their harnesses on the wings back into the front cockpit. You can see in the next photo that it’s devoid of most controls to enable them to clamber in and out. The pilot sits in the rear cockpit.

Unfortunately the Red Arrows couldn’t come along to perform their amazing stunts at this years Airshow… but… The Breitling Jet Team were booked. Sadly they also experienced problems and had to cancel their display on Sunday too.

The Breitling team is made up of Albatros jets in distinctive dark blue and yellow colours. Their debut at the Blackpool Air Show is a jaw-dropping display of formation flying over the seafront. They’ve performed in front of huge audiences, all across the globe.

Some of the world’s finest military and civilian aircraft have performed over the iconic seafront. This is Blackpool Airshow 2017 – the Trig-Plane performing over the sea watched by huge crowds!

The 2019 event is sponsored by Northern Rail.

AeroSuperBatics have been specialists in display flying for over 30 years and operate one of the best-loved civilian air display acts in Europe. They will perform a breath-taking sequence of acrobatic stunts, all whilst strapped to the top wings of the beautiful 1940s Boeing Stearman biplanes.

The Blades Aerobatic Team comprises extremely skilled and highly-experienced pilots with more than 25,000 hours of flying experience between them. Undertaking aerobatic manoeuvres less than four metres apart in perfect formation and at speeds of up to 200mph, the crowds will witness 30 separate awe-inspiring manoeuvres in the 15-minute display.

The Calidus Autogyro will join the show for some up close and personal aerobatic fun! Due to their low speed, the Gyro Display is cleared to fly just 50 metres from the crowd.

The military part of the programme includes the Battle of Britain Memorial Flight, featuring a Spitfire, Hurricane and Lancaster bomber, and the RAF Chinook Display Team which will showcase the huge helicopter’s versatility with a stunning range of manoeuvres.

This year, the awesome Typhoon will be flown by Flt Lt Jim Peterson who has designed a display to demonstrate the aircraft’s immense power and acceleration. Spectators will see just why the team’s catchphrase is #BringTheNoise!

The programme will begin shortly after 1.30pm on both days, with the best viewing points on the promenade between North and Central Piers.

Stay for the Weekend!

Blackpool Airshow weekend is one of the busiest weekends of the year. Please arrive early to avoid traffic congestion.

Why don’t you stay for the weekend and enjoy everything that Blackpool has to offer?

The Carlton Hotel near North Pier is running a special offer promotion for Airshow weekend. On 10-11 August, Friday and Saturday – it’s just £125 per person per night for bed and breakfast.

To complement the aerial programme, there will be plenty to see and do on the ground.

Visit the wide range of stalls, attractions and food concessions in the Blackpool Air Show Village on Tower Festival Headland.

Take a look at the Typhoon and Red Arrows flight simulators in the village.

The official Blackpool Air Show programme will be available to buy over the weekend. The souvenir brochure includes information on all the aircraft plus timings.  Get your before the event from Monday 5th August priced at only £1 from the VisitBlackpool Tourist Information Centre on the Promenade opposite Blackpool Tower. Please mention you saw it on Visit Fylde Coast!

This year there’s a unique opportunity to get up close to a replica of the Apollo 11 lunar module, marking the 50th anniversary of the moon landing.

It’s 13-feet high and spans 18 feet. A commentary and informative display explains more, plus there’s a lookalike astronaut for your selfie photos. Kids can also enjoy a rocket building workshop

2018 is the 100th anniversary of the end of World War One. The Royal Air Force Aerobatic Team performed to millions of people this year, in commemoration and celebration.

Highlights of this years show included the roar of the RAF Typhoon, along with aerobatic displays from the Wing Walkers, The Blades and the Turbulent Team. The Chipmunk, Strikemaster and Swordfish are some of the world’s best aircraft that you’ll see, all flying over Blackpool seafront.

The programme always showcases the very best in British aviation. Watch a whole host of amazing flying machines and some of the country’s most talented pilots. 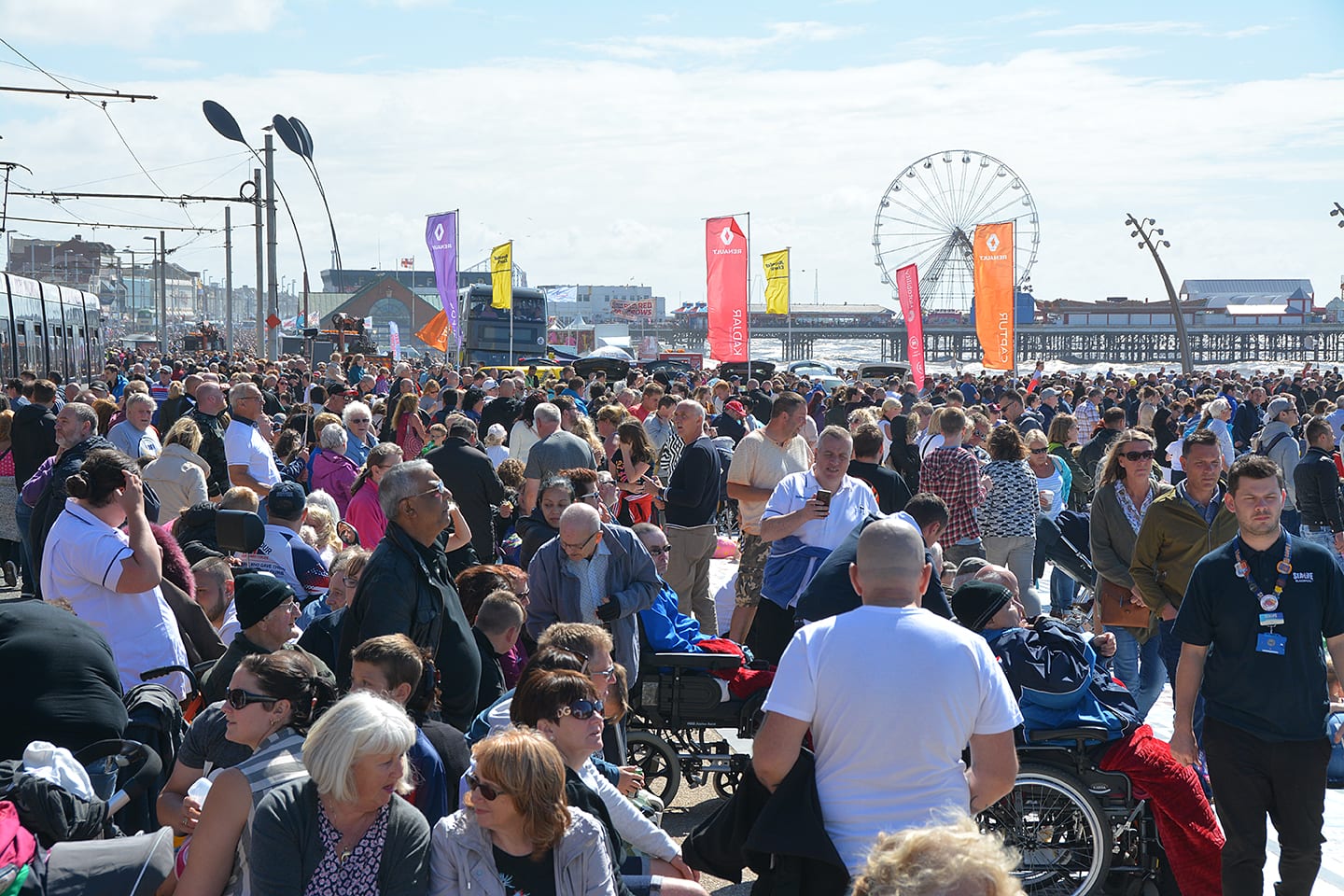 The Battle of Britain Memorial Flight, featuring a Spitfire, a Hurricane and a Lancaster Bomber, put on a hugely patriotic display in 2017.

Huge crowds watched an RAF Typhoon thunder across the horizon. Aerobatic displays were enjoyed from Team Twister and Team Trig as they performed their own versions of aerial ballet with exhilarating sequences of loops and rolls. The Huey Helicopter is a sight to be seen – and heard!

For the first time, the 2017 airshow included the Red Arrows on both days. Relive their famous fly-past along a packed-out Blackpool seafront in this video clip below –

The RAF Red Arrows concluded the display on both days with their own display of aerial control and speed.

See them arrive at Blackpool Airshow to perform their finale in this clip! 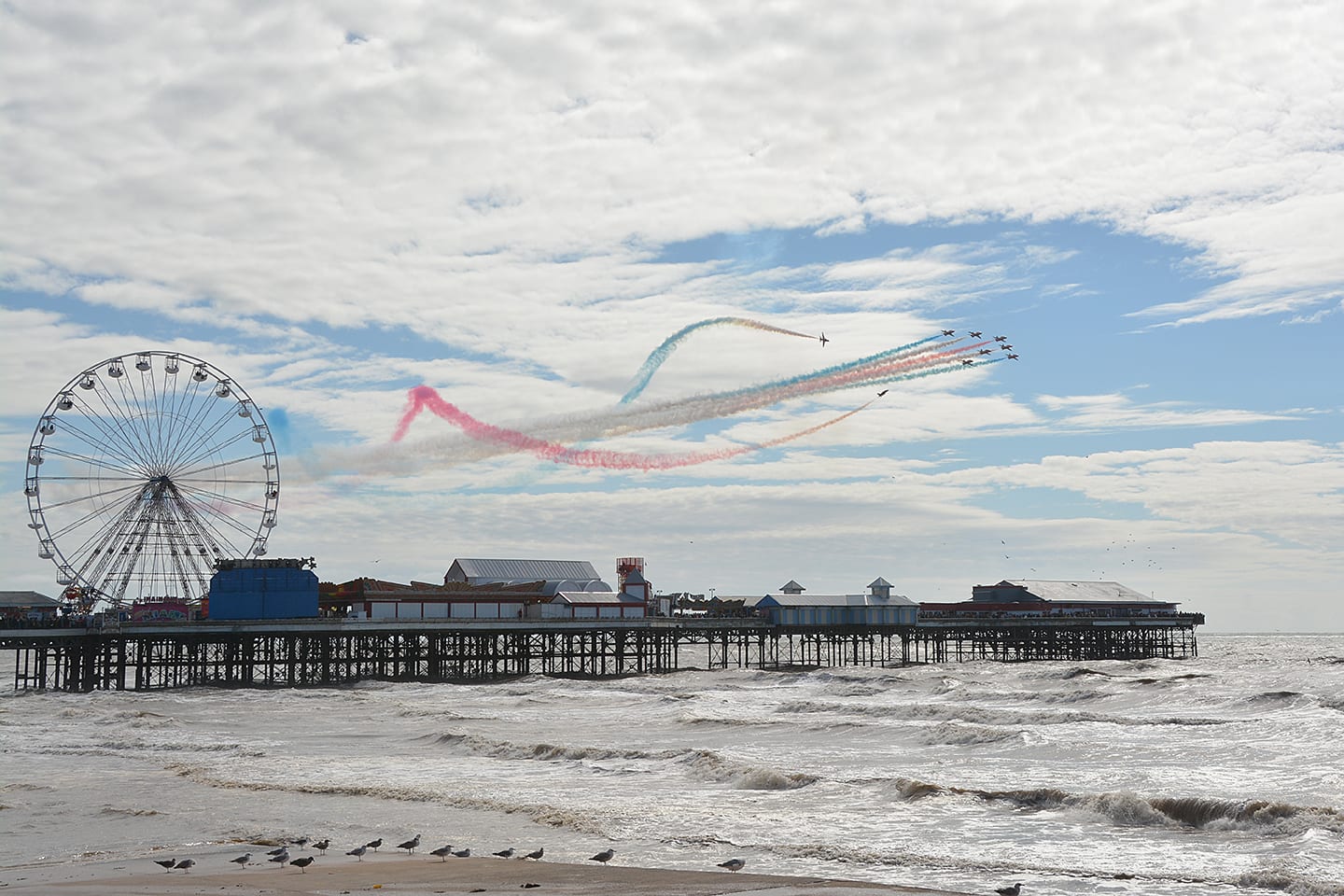 You can bet that the entire length and breadth of Blackpool central promenade will be packed with people. Everyone enjoys the brilliant event, no matter what the weather. What a fabulous weekend it was in 2017 for everyone to enjoy, and thank you to Visit Blackpool for delivering a well organised and superb event.

There’s a full album of photos of planes, people and the whole event on the Live Blackpool Facebook page. Click on the image and follow the link 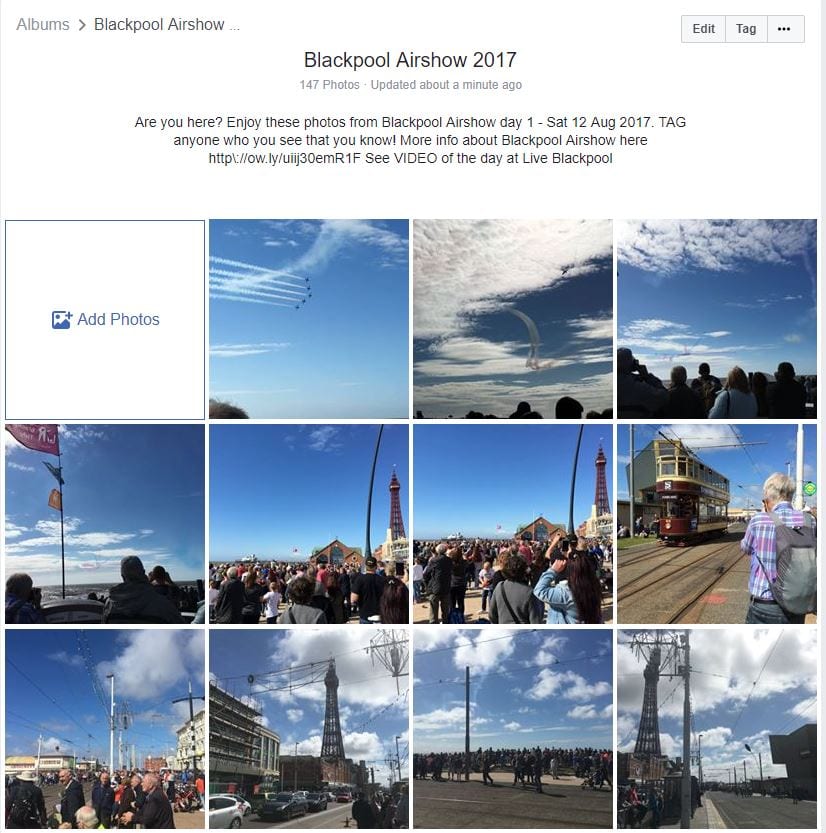 Why don’t you make a weekend of it and stay over for Blackpool Airshow this year? It beats fighting your way through the traffic – and it’s a brilliant, family friendly atmosphere.

Have a look at what’s on offer from members of StayBlackpool – the independent accommodation providers association.

Check out some other local places to stay here on the Fylde Coast.

Blackpool Airshow has been wowing the public since 1909, when the town put on the very first official air show in Britain. That was the same year French flyer Louis Bleriot made the first historic crossing of the English Channel.

We’ve kept a few of the highlights and fascinating facts from recent years on this page, to look back at as the years roll by!

One of the world’s most popular aircraft, Vulcan XH558, made its final ever appearance in the North West at Blackpool Air Show in 2015. 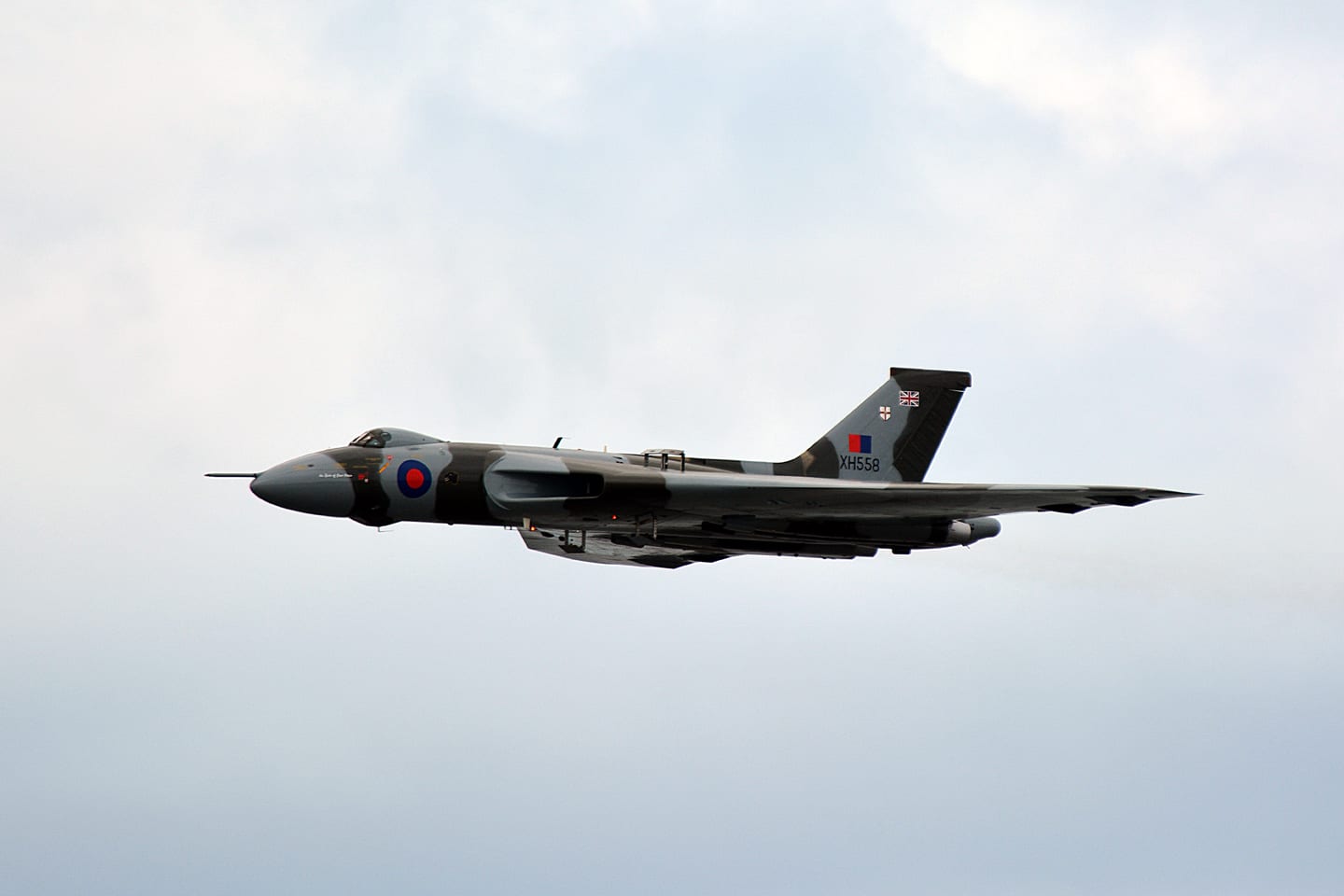 Watch the Vulcan in this video, flying low over Cleveleys beach, on its way to Blackpool Airshow on 9.8.15

Vulcan fly-past over Cleveleys beach for Blackpool Airshow in 2015

The plane played a key role both during the conflict in the Falklands and during the Cold War. The final remaining Vulcan was in her final flying season before being retired after a remarkable career.

To celebrate, the crew launched a dramatic new display routine. It was led by Martin Withers, who captained Vulcan XM607 on the famous Black Buck mission during the Falklands conflict.

Vulcan XH558 was operated by the Vulcan to the Sky Trust (VTST). It was returned to the skies in 2007, following what’s believed to be the most ambitious technical restoration programme ever undertaken.

The charity raised more than £2 million each year to service and operate the aircraft, based at Robin Hood Airport.

VTST Chief Executive, Dr Robert Pleming, said: “There will be no more opportunities to hear a Vulcan’s spine-tingling howl as she climbs high into the sky for another dramatic display, or to see her rolling onto her side to reveal her giant delta silhouette.

“It’s highly gratifying that the aircraft made a return appearance to the Blackpool Air Show.

“She was among many iconic aircraft and in highly distinguished company. It’s very sad that this was the last time she performed her spectacular display over the Irish Sea with the stunning backdrop of Blackpool Tower.”

More About the Red Arrows

The Red Arrows are a firm favourite of everyone who enjoys the Blackpool Airshow. They are ambassadors for the United Kingdom and showcase the excellence of the Royal Air Force. 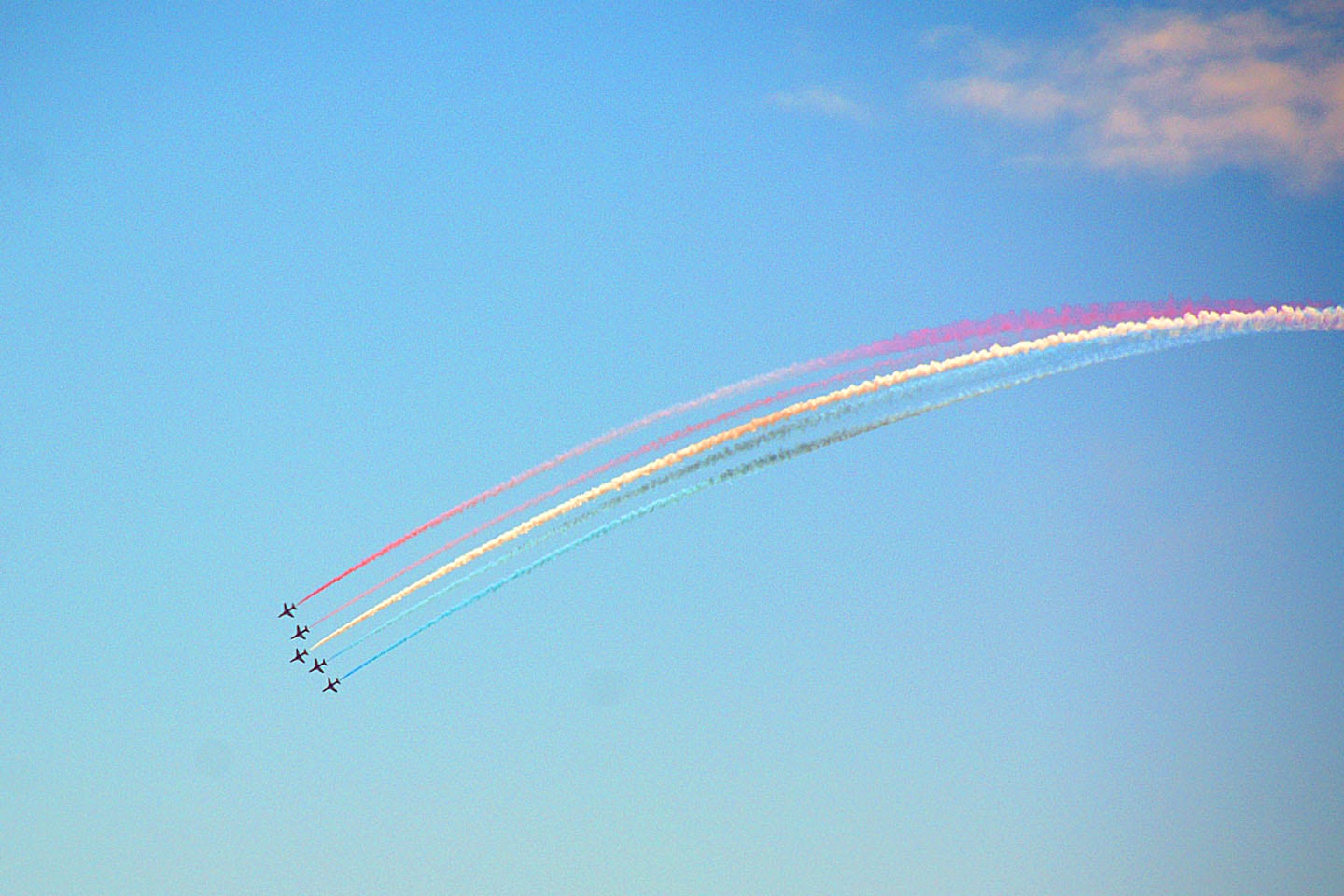 The team consists of nine display pilots and 110 support staff. There are operations and flight planners, engineering technicians, photographers, safety equipment experts, drivers, a public relations department, suppliers and administrators. The engineers and support staff are known as The Blues and wear distinctive blue coveralls.

The Red Arrows are based at RAF Scampton in Lincolnshire, flying Hawk jets. 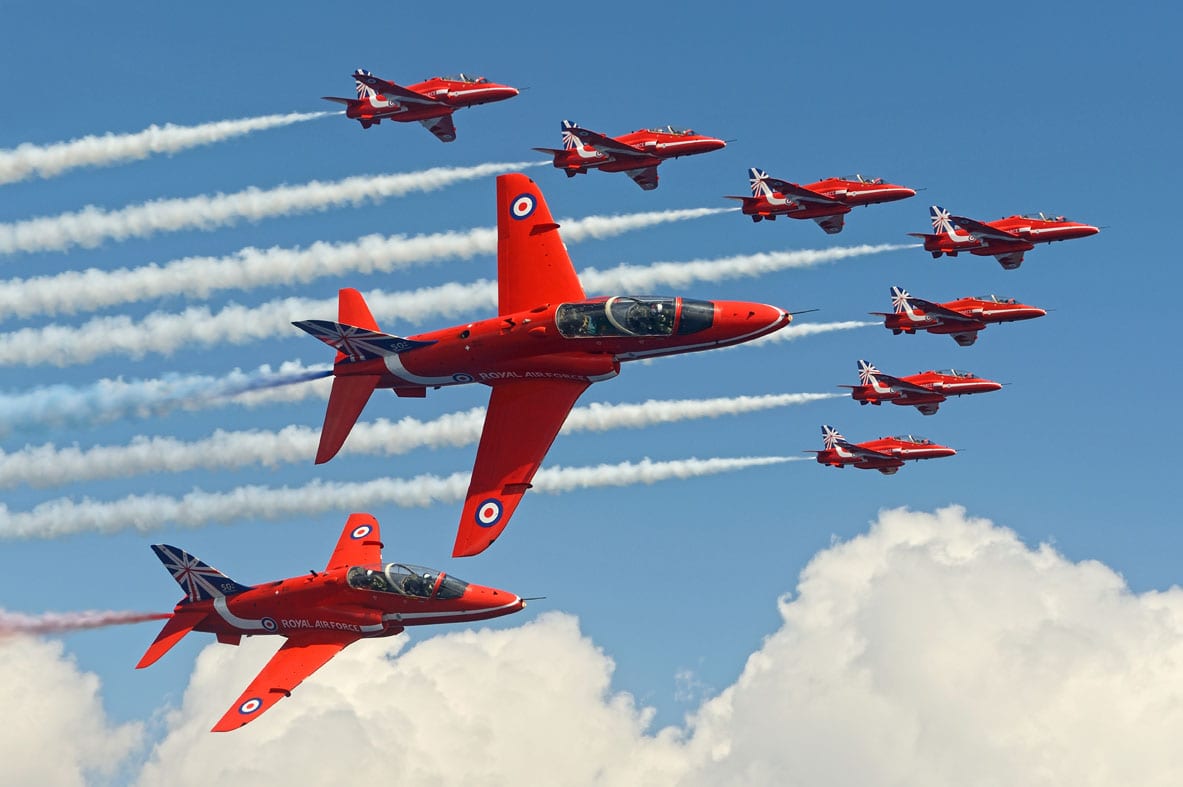