There are some memories that you carry through life with you and just don’t forget (like the death of your first pet…) but one of the ones which still makes me smile to this day was when we saw Billy Pearce at the Grand Theatre donkeys years ago.

We were here on holiday when living here was still a twinkle in our eye, and as we always did, booked for a show – and probably others – which ones I couldn’t even begin to remember.

We were quite near the front row and the stage, we always liked the front row. The one joke that really stuck in my mind was something to do with anoraks on the market as a specialist Mastermind subject at 1899 to 1999, told like a date. Not remotely funny in the retelling but hysterical at the time. I thought my husband and dad were going to die laughing… so I just couldn’t pass up an opportunity for an interview with the great man ahead of his latest show date at VIVA on 10 July.

I started grinning the minute he answered the phone, and we got chatting like old mates in our matching Yorkshire accents, like we’d known one another forever “What you see is what you get with me” he said – me too!

Five minutes in and I was guffawing, with tears rolling down my face and at one point I even had to tell him to behave, I was laughing to the point I couldn’t concentrate on what I was doing. If I’m talking to someone on a bench in Cleveleys I like to know their life history and the great funny man Billy Pearce didn’t escape…

Apparently his mum had the biggest dancing school in Leeds and a shortage of boys to take part, so he got roped in for them all – top secret of course so that his school mates didn’t know (you can’t help but think he got the last laugh). Always having had a funny streak (which was handy for getting out of trouble) his showmanship grew until he joined Butlins as a Redcoat at a large hotel in Margate with his less funny friend and performing partner – who didn’t like Billy getting all the laughs.

Anyway, after that partnership ended followed by a few others, Billy eventually went on his own way as a variety act, described in the club programmes by the acts he performed: Guit.Voc.Banj.Tap.Imp.Com. You can only think that they got fed up of the long list and eventually he was listed as Billy Pearce – Com. “I’m a comedian” was his shock reaction!

Of course as someone who suffers from Blackpool-fever myself, I wanted to know what he liked about our great resort. “Blackpool’s been brilliant to me” was the answer. He first performed at Layton Institute and wasn’t impressed by the reception he got, but in 1986 when he’d been on New Faces on TV it was all to change and Blackpool fell in love with Billy, while he fell in love with a special bit of Blackpool – meeting his wife, a dancer, while starring on North Pier.

The first show he did was with Stan Boardman and the Dooleys and Looneys at The Grand. One night when Stan Boardman couldn’t do the show, Billy ended up saving the show and being the headline act. The newly saved Grand with all its Friends were fantastic with their support in what was for him a hair raising experience! His last show was with the Osmonds, and, fascinating fact, he holds the record for being the person to have done the most performances and been on the stage at The Grand more than anyone else.

Anyway, back to 10 July and the show at VIVA. Billy’s been impressed with the team at VIVA and the great line-up and variety of shows that they’ve secured for the venue in such a short time, and he’s looking forward to being back on stage again in Blackpool.

Apparently he’s got a database of 28,000 pages of jokes and his material comes from inspiration in the world around him, the internet, Twitter, texts and emails from fans. In the half an hour that I was talking to him he cracked me up several times, like while he was telling me about doing a charity show tonight for the Hallamshire Children’s Hospital in Sheffield – not far from where I lived – and while saying that he likes to do his bit he couldn’t resist adding that the last charity event he’d done was for battered fish at Harry Ramsden’s!

It’s obvious that he gets huge pleasure from making people laugh – the more I laughed the more he egged me on – and it’s the payment he enjoys for plying his trade, more than the cash that pays the bills. I was already a Billy fan when I picked up the phone, and even more so when I put it down, agreeing with Martin from VIVA and saying out loud to myself “what a lovely man” and heading off to the supermarket with a smile on my face.

I did ask him whether people expected him to be funny all the time, and in fact whether he was. A larger than life man I once knew used to say that he “opened the fridge door and the light came on” – was comedy like that for Billy? “I’ve been doing it a long time” he said “and it’s much nicer to be happy and laugh than it is to be grumpy every day”, and I think he’s a naturally sunny man – it just falls from his tongue. Someone who’d been to his house once told him that it had a lovely atmosphere, to be met with the answer “everything’s been paid for with laughter”.

So if you haven’t already, get your seats booked for VIVA on 10 July 2014 – just don’t do what a rather amply bosomed woman did recently and laugh so hard that you pop the buttons on your blouse!

Find out more about the Billy Pearce Funny Guy show here, and how to book. 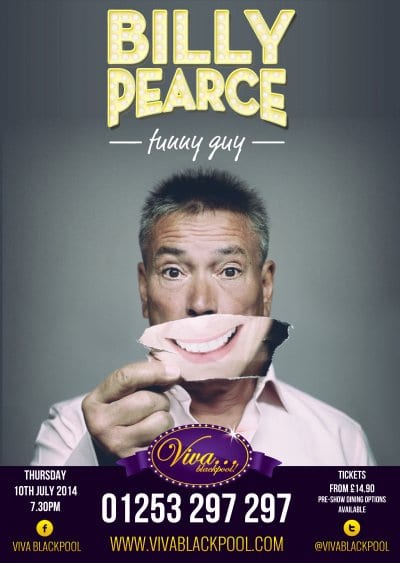