Take a look around Tower Festival Headland. It’s the seafront between Blackpool North Pier and Central Pier – watched over by Blackpool Tower – our world famous landmark!

Tower Festival Headland is engineered into the sea defences. The extra 60m of land extends seawards to create this amazing entertainment space. Most of the time it’s a place for fun and leisure, hanging about and enjoying the seaside views.

This video was taken in July 2016 when the temperatures soared to record highs! Come on in the water’s lovely…

Blackpool Tower Festival Headland in the middle of a heatwave

The Headland is where you’ll find the well known and hugely popular Comedy Carpet which opened in early 2012. A new icon for Blackpool, it features jokes, songs and comedy catchphrases from Britain’s best loved comedians.

Don’t forget the kinetic sculptures – not that you can miss them! Standing 35m high these Dune Grass blades bend and sway in the wind. See them in the next photo.

It’s a great place to head for to soak up that special Blackpool seaside atmosphere! You’ll find space to take a seat around the edge of the Comedy Carpet. Sit awhile and just relax on one of the seats or huge pebbles.

Amazing all Year Round!

There’s no doubt about it, any seafront is wonderful in the summer sunshine, and Blackpool is no exception. We all love to feel the warmth of the sun on our faces – it does wonders for your mood and makes us feel happy.

If you’re used to visiting the seaside in the summer you might be surprised at just how brilliant it can be at other times of the year. OK, it can be really awful in winter (it can in summer too!) but all year round there are amazing days that just make your spirits soar.

Just look at this clip of one amazing day in March…

And this is Blackpool promenade in winter…

Have you ever spotted reporters and film crews here? It tends to be the place where they make a bee-line for when reporting about things to do with Blackpool. It’s not uncommon to see TV crews reporting for the news, and Blackpool gets its fair share of film production companies too! 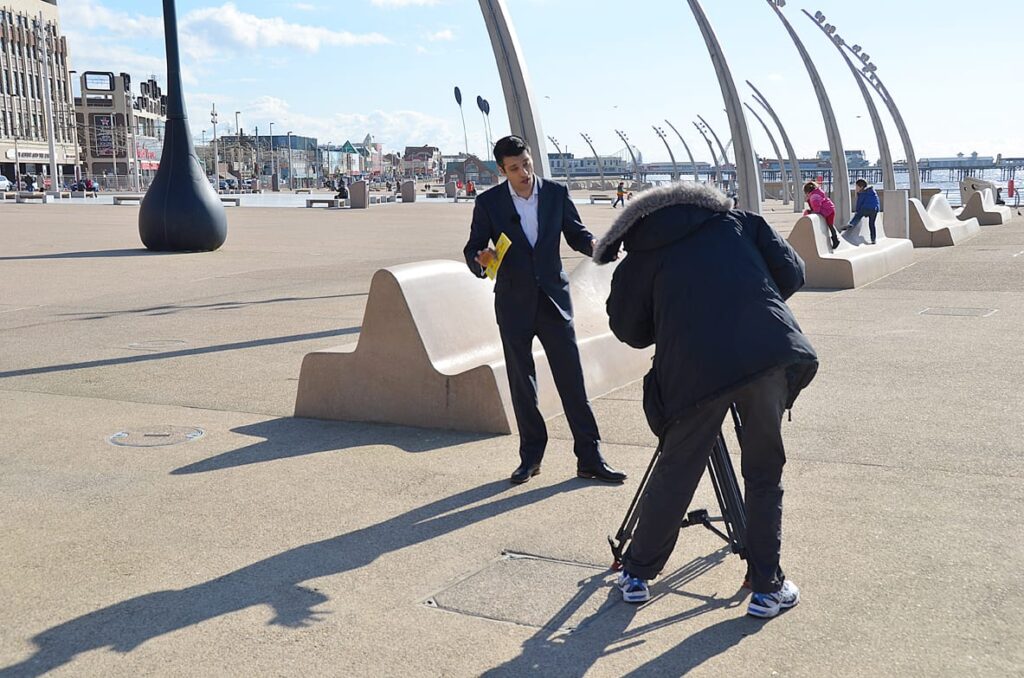 Tower Festival Headland comes into its own as a major entertainment space with capacity for 20,000 people! The Blackpool Illuminations Switch On event is held here each year.

Have you noticed the lighting columns that sweep across the edge of the prom? You can see them in the next photo. 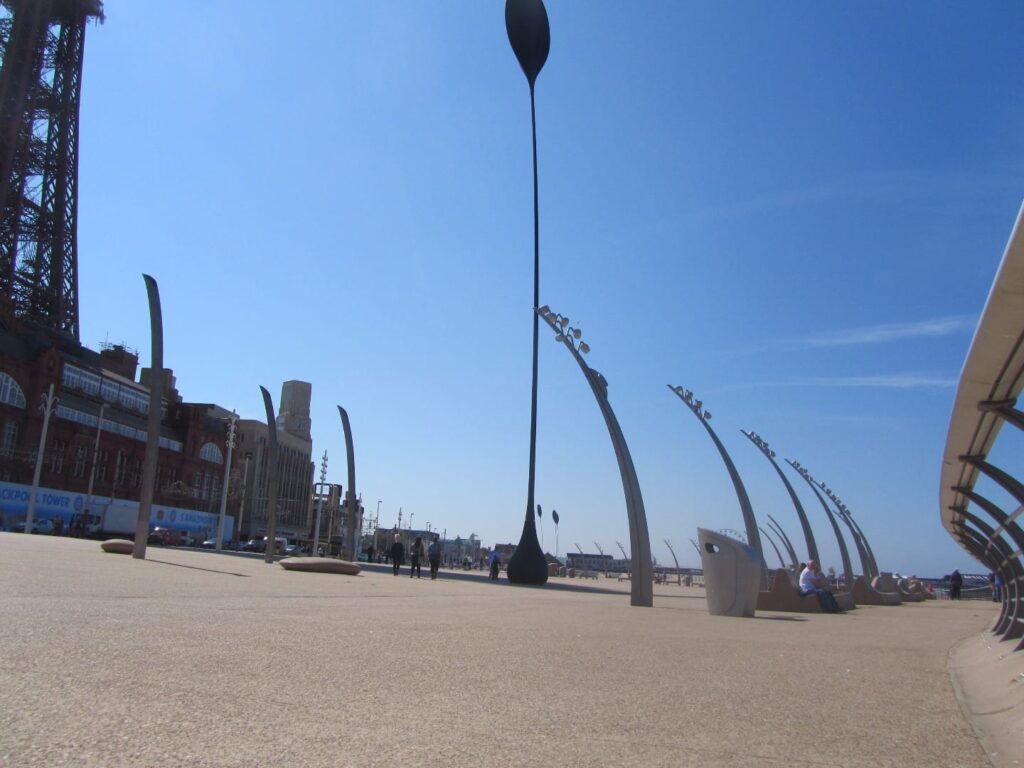 They’re the frames for the windbreaks installed for big events. Invaluable for blocking out the worst of the weather, they make it a versatile space too.

The promenade road and tram tracks are sometimes closed when major events are held and together with Tower Festival Headland create one huge, safe event area.

The first official opening concert by Sir Elton John was held on Saturday 16 June 2012. Sadly, the weather was vile (as it can be, even in summer). For safety’s sake the event was called off just as it got going.

Other events like Blackpool Airshow are also based here, when literally tens of thousands of people gather for a perfect view as planes fly above the water.

In its prime spot right against the sea it’s the home to the Visit Blackpool Tourist Information Centre.

Upstairs is the Wedding Chapel where you can get married looking at the Tower. You’ll see it through the window that you can see in the above photo, just at the top left of the tram. There are breathtaking views of the beach through the front windows.

The rest of the building is The Beach House, a seafront cafe restaurant.

Festival House was named as one of Britain’s 50 best new buildings by RIBA in July 2012 (the Royal Institute of British Architects).
Just three buildings were chosen from the north west region to be named amongst the best in Britain for architectural excellence. Festival House was one of two in Lancashire. cRMM are the architects for Festival House, and Parkinson Building Contractors of Blackpool the building contractors. The project was managed by Blackpool Council’s Capital Projects Team.

In November 2012, Blackpool Tower Festival Headland won the Design Excellence Award in a national design competition.
The Regeneration and Renewal Awards, held in London, recognised independent design consultancy LDA Design.
LDA Design began working on the project in 2007. They won an international design competition calling for a playful and surreal landscape for Blackpool’s seafront. It’s inspired by Blackpool’s tradition of fantasy and escape, recalling the natural dunes that once formed the coastline.

Tower Festival Headland – Made Possible by the Sea Defences

Between north and south piers, the whole of Blackpool seafront has been transformed over recent years. It’s now a curvaceous piece of engineering from end to end. The modern design includes Spanish Steps that link the beach to the promenade and also incorporates traditional vertical areas of sea wall into the design.

It’s primary purpose is to reduce the risk of flooding and erosion. The attractive design has transformed a huge, practical area of concrete into our lovely seafront. Have you been to Blackpool promenade recently? Why don’t you take a look!

Stand against the steps at high tide and you’ll see how they work. As the waves reach the steps you can see their energy washing away as the water tumbles against them. It’s a simple design but very effective.

Not only are they effective and attractive, but the Spanish Steps make for fabulous access to the sands and unlimited seating. It’s a great place to sit and enjoy the seaside view of miles of unspoilt golden beaches.

Rebuilding the sea defences is the reason why engineers were able to create Tower Festival Headland.

Live Blackpool is part of Visit Fylde Coast, a digital media product independently published by The Rabbit Patch Ltd. We’re a design and creatives company right here on the Fylde Coast. Our Seaside Emporium website is packed full of our own original art. 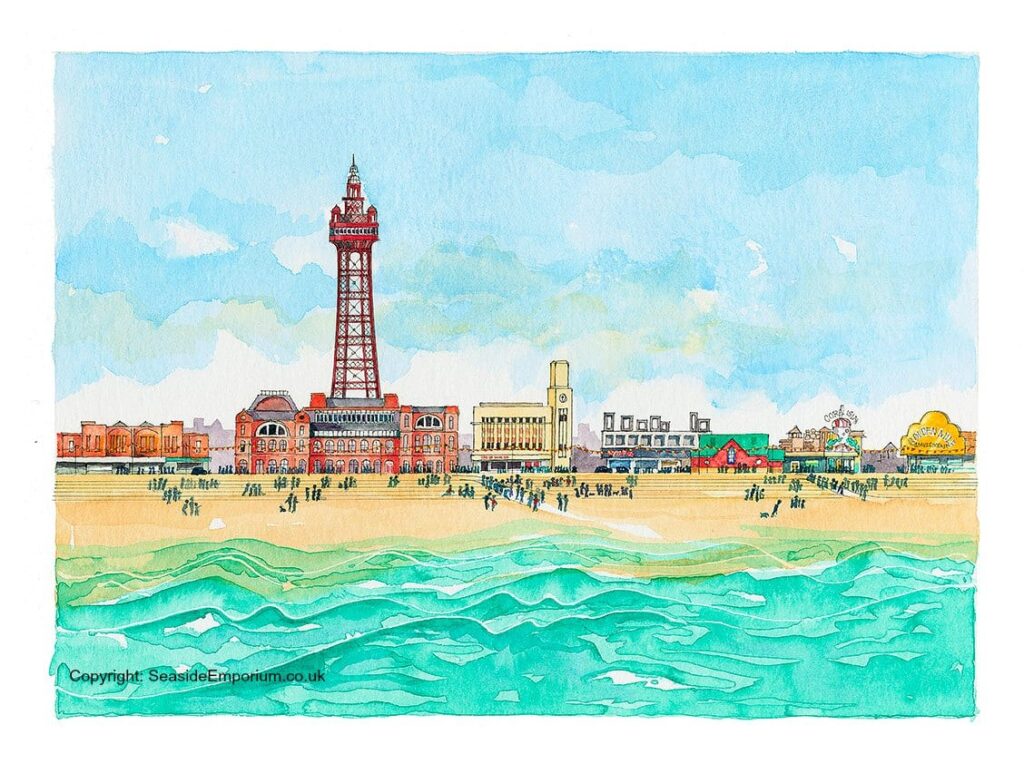 This is our original watercolour painting of Blackpool Seafront. It’s available in various sizes as a framed, mounted or plain print.

Follow the link and have a look around at both local scenes and traditional seaside views. 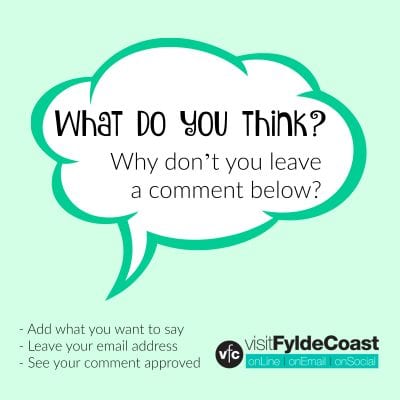